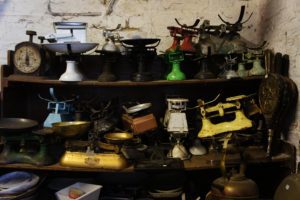 Balance is a tricky thing.  Too much of one thing tips the scales in the other direction and we get totally out of balance.

But balance is not just about stuff vs space (although stuff vs space is a huge issue for a lot of people).  For some interesting information on how much stuff Americans have, here are some statistics from a recent CBS Morning show.

And that’s just for the stuff we CAN’T fit inside our homes, where there’s more “stuff” piled in closets, bedrooms, garages and basements.

The CBS segment speaks to the stuff vs space conundrum with an interesting question: why do we park $10,000 cars outside when we fill our garages with stuff of largely no value?

Nearly all my clients struggle with the self value vs stuff value balancing act.

A client spoke to a situation at their home.  His comment to me: “my wife asked me a while ago to clear out the garage so she could park in it.”  When I inquired what “a while ago” meant he admitted it had been 18 months.  It was clear he was prioritizing the stuff value in his garage above the his wife’s self value (her request to be able to park in the garage). The prioritization realization created a perspective shift.

Another client comments regularly about how her closet (stuff) drives her crazy (self).  It is packed.  She could easily get by with half of the items in her closet and still be considered one of the best-dressed women I know.  If she eliminated half the stuff she would feel the benefit of open space, organization and clarity (self value).  For years she’s been prioritizing her stuff over herself.

And then there is the client who tries to cram too many commitments (stuff value) into his schedule resulting in limiting his time with family and friends (self value).

What’s your balance of self value vs stuff value?