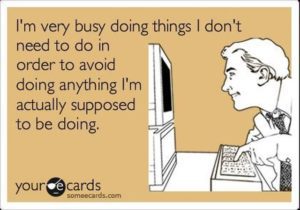 (I was going to publish this next week as a joke about procrastination, but decided against it. Probably wouldn’t be as funny as I think it is right now.)

I like to think of myself as a pretty efficient, on-top-of it kind of gal . . .  but I’m also a bit of a procrastinator.

These are some of my top reasons for procrastinating:

How many more can you think of?  Several, I’ll bet.  I think we can all acknowledge that these are excuses, not reasons, for not getting things done.  What’s the reality behind each of the above?

We’ll feel more motivated tomorrow:  Well, we probably won’t.  If we didn’t want to do it today, we more than likely won’t want to do it tomorrow.  What’s going to change in 24 hours that will make the task more inviting and stimulating?  Nothing.  How successful are we at predicting how we will feel in the future?  Generally, not very good.  Plus, we don’t know what additional roadblocks may come our way that would cause an even more negative impact. It would help if we could identify why we are delaying starting the project, identify any emotional or physical roadblocks, then remove them.  More than likely we stumble over emotional roadblocks due the uncertainty of how to accomplish the task. Postponing alone won’t resolve that roadblock.

We work better under pressure:  Studies show we don’t.  Things generally take longer than we anticipate and are more complex than we give them credit for.  When we leave things to the last minute we rush, make more mistakes, and generally deliver an inferior product because we didn’t have (or make) the time necessary to do the job right.  Is that the image you want to project to your employer, family, or friends?  Probably not.  Working under pressure causes extreme stress.  Starting the task or project early, identifying the demands of the project, and working frequently and methodically, will result in a better result.  Leaving the last look and finishing touches until the last minute may be okay, but leaving starting until the last minute won’t help deliver the best product.

We don’t have all the tools we need to get the job done:  Well, maybe we don’t, but not having the tools readily at hand doesn’t mean we can’t start.  What we CAN do is start the project by breaking it down into steps, the first one being to identify what tools or resources we need to complete those steps, and make a plan to get started, including scheduling it on our calendars.

The project is just too big:  Sometimes the task just seem too big and that’s understandable.  Some projects are quite large and very daunting, but that doesn’t mean it’s impossible to accomplish.  I heard a great example from Timothy A. Pychyl, Ph.D (an expert on procrastination) about trimming his dogs toenails.  He has 10 sled dogs, each with 20 toenails.  Thinking about trimming 200 toe nails was too much; but breaking it down into smaller chunks of two dogs per day (40 toenails) made it a much more manageable task.  So, even though the entire project may seem like too much, breaking it down into smaller, more achievable tasks will help.

Do you see yourself in any of the above scenarios?  I know I do.  The key is determining what is holding you back and work through it.  How do we do that?

Although it sounds simple, sometimes that’s all it takes.  Just getting started will provide the momentum to finish.  Unfinished tasks tend to be uncomfortable, so once we get started, we have the drive and desire to finish.