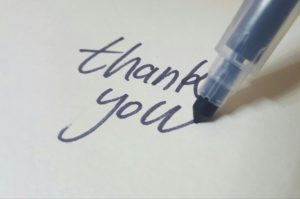 I had an interesting exchange with my 4-year old grandson recently.

On our way home, we passed a park we’d frequented.  He said, “you’ve taken me to that park before.”  I said I had and asked he wanted to go there again.  He said he did and followed with “thank you, Grandma.”

This exchange intrigued me.

First, the fact that my 4-year old grandson thanked me without being prompted was in itself both very fascinating and encouraging.   Nicely done on the parenting front, kids!

Then I got to thinking:

As I thought about this exchange I realized, no matter how many times he said “thank you” it made me smile.  And it’s not just because a 4-year old says it.

Many of my clients going through either a physical or emotional transition say “thank you” so many times I lose count, but every time I feel that positive dopamine rush which makes me want to do even more for them.  Whether it’s the first or fifteenth time, the rush is the same.

What does an appropriate “thank you” look like?  Well, it depends. On the giver. On the recipient. On the situation. On the culture.  There is a whole mess of variables to take into account, but largely, I like a physical “thank you” notes for almost everything. Whether it’s appreciation for and effort, a gift, a job interview, etc. I find a physical note means so much more than a simple e-mail or phone call.

Many of you in the Puget Sound will remember Sunny Kobe Cook from the Sleep Country chain of mattress stores.  I recently heard her speak and said the #1 retention tool in her business was a personalized “thank you” note to customers. And, even more importantly, the one thing that kept her, as a loyal customer was also a personal thank you note.  Such a small effort for such a big return.  My guess is, there is almost as much of a dopamine rush from saying “thank you” as there is from receiving it.

I’m a big believer in letting people know I appreciate them and their efforts.  Saying “thank you” is a small courtesy, yet can provide so much positive energy to both the sender and the receiver.  Give it a try, see how it feels.